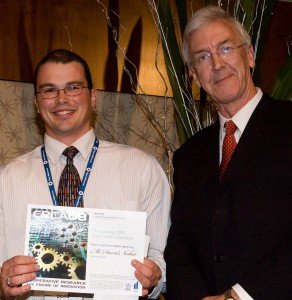 The annual conference of the Cooperative Research Centres Association (CRCA) was held at the Australian Technology Park, Sydney, in May 2008.  The conference brought together over 300 people who are involved in the establishment, management and operation of CRCs in Australia.  Every year, a plenary session is devoted to showcasing outstanding CRC early career scientists who are given the opportunity to present on their work.

In 2008, eight early career researchers, from a field of contending postdoctoral fellows and PhD students from more than 30 CRCs, were selected to present at the conference by a specialist panel.  The panel considered written material submitted by the scientists and judged their ability to communicate effectively about their research achievements to a non-specialist audience.

David Nisbet, a PhD student with the CRC for Polymers, won the CRC Early Career Scientist Award for the best long presentation.  David is undertaking his research in the Materials Engineering Department at Monash University.  He presented his research on New stem cell strategies for nerve regeneration. David and his supervisor Dr John Forsythe have constructed a biodegradable polymer scaffold that supports neural stem cells and provides important signals to assist nerves to regrow.  This technique has the potential to revolutionise nerve regeneration and provides a boost for research into Parkinson’s disease.

David explained, “The polymer-based scaffold functions in a similar way to the temporary scaffolding in building construction.  After it has served its purpose, it degrades away, leaving the cells to exist in their own natural matrix.  My scaffolds are also being investigated by colleagues at the Howard Florey Institute and the Mental Health Research Institute of Victoria.  Within these Institutes I am currently investigating the performance of nanomaterials within the body and the preliminary results are encouraging.  We have demonstrated an ability to control inflammation once the materials are introduced into the body, and have managed to encourage native nerves to extend and grow throug the scaffold.”

David was presented with his prize – a $2,000 cheque – at the CRCA Innovation Gala Dinner by Dr Geoff Garrett, Chief Executive Officer of CSIRO.